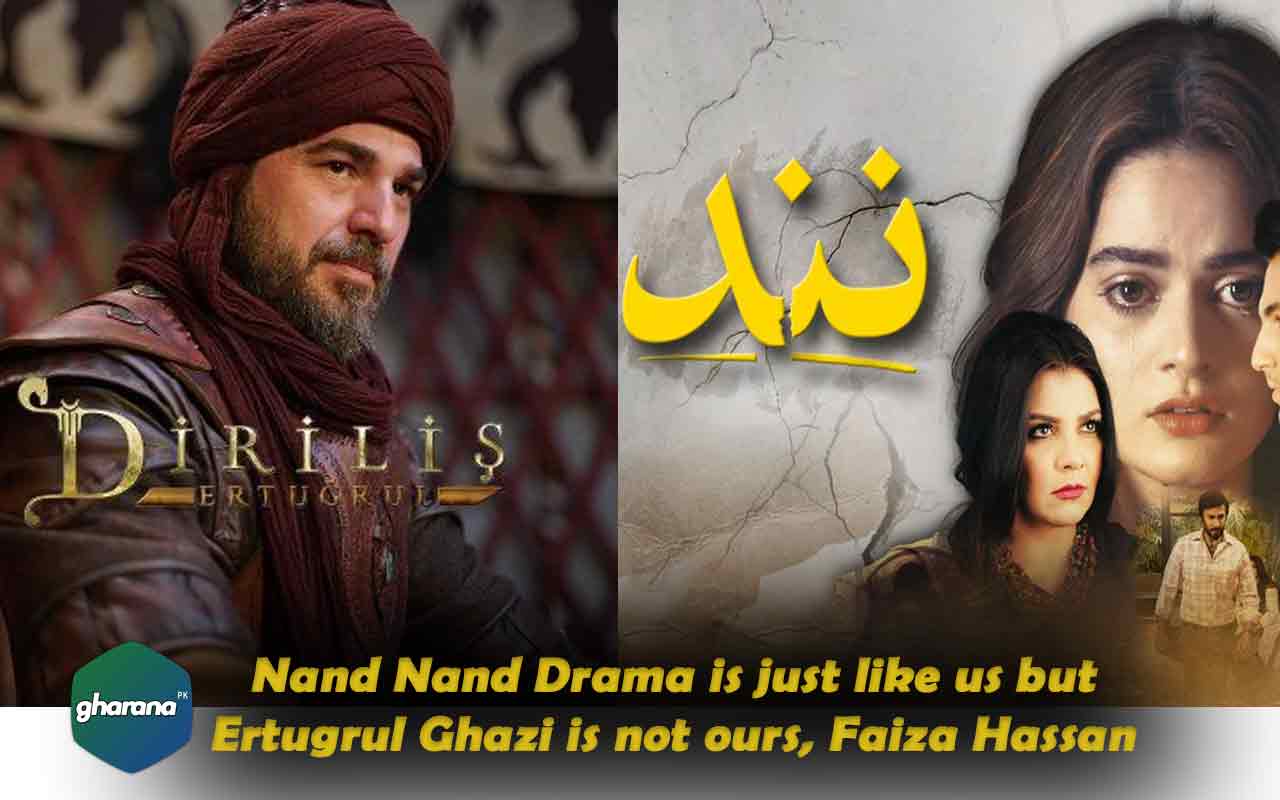 Nowadays, Pakistani actress Faiza Hassan is playing the role of a villain in the play ‘Nand’ and regarding this play, she says that it is just like us. Here below we sharing the views Faiza Hassan that she said Ertugrul Ghazi is not ours but NAND drama Is.

Faiza Hassan is playing the role of a drama serial ‘Nand’ aired on private channel ARY Digital, which spoils her own brother’s life due to jealousy and accuses her sister-in-law.

The cast of Nand Drama

The story of this drama is written by Samina Ijaz and due to her story and excellent acting, this drama is very popular nowadays.

Faiza Hassan said that she could play an even more dangerous role because she is an actress and this is her job.

Continuing, she said that if she given the role of an innocent woman. She will also play because it is her job to play her role in a better way than 100%.

Before this drama, the actress played the role of Nand in a Pakistani film ‘Load Wedding’.

“As actors, we have to play different roles in different ways,” she added.

Ertugrul Ghazi is not ours!

Regarding the Turkish drama Ertugrul Ghazi, which broke the record of popularity in the country. Faiza Hassan said,

It is not ours, we are watching it and should watch it but that drama is not ours. ‘

Continuing her speech, she said that the web series ‘Churail” is a story very similar to ours and not to some extent but Nand Drama is just like us.

She said that if the public opinion about the drama seen on YouTube, many have written that it has happened to them.

Role of Nand in Film vs Drama

Regarding her roles in the film Loadwedding and Drama Nand, she said;

Nand of the film was poor, whose purpose in life was marriage. However, there was a problem of dowry, she was an uneducated woman from a village.

Faiza Hussain further said that Nand of the drama is happy, she has everything but she is still not happy.

It should be noted here that Faiza Hassan is playing the title role of this play. However, the names of the play are usually on heroin and she is playing the role of a villain.

In this regard, Faiza Hassan said, it’s a good thing that this attitude is changing because of this drama. At the same time, she said that she always chooses the character around whom the story revolves.

She said that many peoples involved in the drama so they had to complete this work. In the beginning, there was a fear of the coronavirus. But, after a few days of coming to Pakistan, this fear is gone. Now it seems There is no Corona in Pakistan.